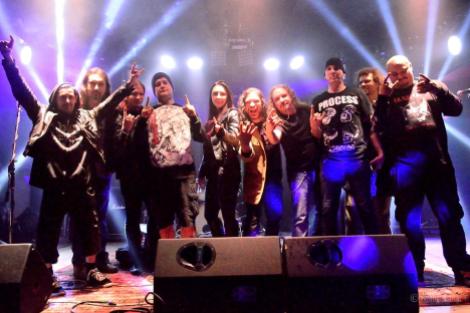 Round #1 winners Process onstage with the Vancouver judges

Wacken Metal Battle begins again! For the third year running, Wacken Metal Battle Canada provides an opportunity for local metal acts to meet on the field of battle in early spring skirmishes designed to test their mettle in musical combat; ultimately the victor is propelled, on foamy waves of beer and praise, to Wacken Open Air Festival in northern Germany for the prized opportunity to perform before an international assembly of Europe’s metal tribes.

Wednesday’s opening bout for BC combatants presented a lineup with five acts of various styles and levels of experience at Vancouver’s Red Room. Evaluated by a panel of judges with strong ties to the local metal community (and this year including its first female member, Unleash the Archers vocalist, Brittney Slayes), each band received feedback after their set that highlighted strengths and underscored areas for improvement.

Sleepcircle‘s groove-centric, meandering and mathy alt-rock was most notable for vocalist Alex Bone’s unique sound and style, which piqued listener interest throughout the room. The hard-rocking quartet Uncle Sid delivered a strong performance enthusiastically led by a nervously excited Emerald Green, who was nevertheless seamless in her role as rock goddess vocalist. At the top of their set Aetherion‘s understandably ill-humoured frontman Jesse “Junk” Turner related a personal tale of lately persistent bad luck; however the band’s sharp performance was more affected by unusually grating distortion (evidently a technical problem) than by any overt misfortune, and one hopes to see this Victoria act make the mainland trek more frequently. Mournir continues to impress – this reviewer last witnessed their live show at the Vancouver Metal Compilation CD release party and would likely have won out if not for the irresistible force of Process, who seem to have tightened their live game even more, despite an already blistering set supporting Zimmers Hole in January. (Upcoming competitors for Metal Battle rounds two and three take note: if you missed the show on Wednesday, trust that your performance will need to be razor-sharp in order to stand a chance against this band in the regional final.)

First blood has been shed (congratulations to Process) – onward to round two on March 20th!