Film Review: Sublime Horror Behind the Eye of “Observance”

As Francis Ford Coppola’s film The Conversation taught us, nothing piques one’s curiosity like watching someone carry out surveillance onscreen: tension is immediately palpable as the viewer perceives the predatory nature of stalking, and the sense of paranoia quickly increases as one develops both familiarity and sympathy for the observed; given that the onscreen observer is, in effect, held hostage by his mission to monitor the subject, the subsequent emotional transference reads like a mild form of Stockholm syndrome. Inject this milieu with supernatural and occult elements, as with Polanski’s Apartment or Kubrick’s Eyes Wide Shut, and the emotional experience may become so acute that a darkly sublime nirvana is imminent. Observance takes a page from the book of cinematic espionage and pencils into the margins subtle hints of the occult and of supernatural forces, to marvellously slow-burning effect – one that lingers long after the credits roll.

Grieving parent and strained husband Parker (Lindsay Farris) accepts a lucrative and thereby shady job to observe an attractive and ostensibly innocent young woman. Odd phenomena begin immediately upon his arrival at the apparently derelict building situated across from the subject’s home in an otherwise upscale neighborhood. Parker’s dreams begin to echo this sense that something is amiss; but thankfully there is no trove of old photos or diaries of mayhem and madness to tack a convenient backstory in place and the viewer puzzles over subtly frightful clues throughout, increasing one’s anxiety in the absence of plainly stated or obvious causation. The one perceivable threat, offered in the form of the woman’s angry, abusive boyfriend, is also the voluntary source of the protagonist’s best clue about his present situation, and a single conspiratorial sentence becomes the viewer’s sole anchor to reality and sanity in the film’s final act. 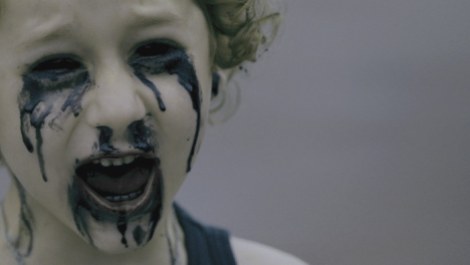 Fans of big-startle tactics and stock character slaughter would do well to sit on their hands for 90 minutes in order to absorb the understated escalations of Observance, as the film capitalizes on our need to quell the unease one experiences when encountering the unknown, rather than subject us to tedious volleys of cheap Hollywood frights and gore. It is the feelings we carry with us after viewing a film that attest to its success or failure as a story, and the unique emotional tone of Observance lingers as a vague memory one persistently revisits without ever resolving the unease and quiet dread woven throughout the story. Genuinely haunting.

Observance screens at Vancouver International Film Festival on October 1st and 3rd, 2015. More details here. (Visit our Facebook page for a chance to win tickets to a screening of the film!)