Since the release of their 2013 full-length Fragments of a Fallen Star, Victoria-area black metal trio Harrow has steadily toiled to cultivate a distinctive blend of black metal with a pronounced folk influence. Fallow Fields, the new album out this week via Bandcamp, features more refined songwriting -rather than sequestering acoustic guitar parts to interludes between black metal outbursts as on Fragments, each of the new songs implements mixed lines of acoustic and electric guitar and weaves them together with poignant violin and/or cello accompaniment (performed by guests Alexia Horozian and Stephanie Knittle respectively.)

However, this isn’t the epic post-rock of black metal of bands like Wolves in the Throne Room, Liturgy, or deafheaven, and despite the folk elements this album is not battle-hungry folk metal, either: Harrow’s hypnotic brand of black metal acknowledges the core aesthetic influence of Romanticism yet retreats from much of black metal’s high Wagnerian melodrama in favour of a more idyllic, pastoral rendering.

From first track “Pathways” through to the finale, “Awake Before the Dawn”, an organic progression of emotional atmospheres, at times wistful, anguished, or anthemic, meanders along a path of airy acoustic melodies intersected by blast beats and sustained by drones that carry and unite each section without falling into soporific doom territory. Ian Campbell’s vocals alternately slash through the aural tempest like lightning or imbue the calmer passages with nostalgic, golden harmonies.

Opener “Pathways” best captures the full range of Harrow’s emotional and stylistic approach: an aurora of shifting tones and tempos, it maintains a simple melodic thread through its 14+ minutes. “Through the Grey” takes a turn for the medieval, with delicate vocals and the sort of pensive melody one associates with the soundtrack to The Last Unicorn before the song ascends a steep black metal slope with a rousing chorus. Title track “Fallow Fields” has a quickened acoustic gait, attended by cello drones and bodhrán, and features Campbell’s best vocal work to date. Closing track “Awake Before the Dawn” continues the melody of “Fallow Fields” into more ethereal territory, anchored by gentle bass notes and tinkling percussion until a dramatic crescendo of electric guitar and crashing cymbals gradually fades to silence.

Arguably, Fallow Fields owes a debt to the band’s physical location in the Pacific Northwest, as these songs effectively conjure the hush of damp coastal forests that skirt mountains besieged by violent storms. Overall, the impression is markedly reminiscent of the mystical aura that one finds in paintings by Caspar David Friedrich, and it’s clear that Harrow has its sights set on horizons equally distant and timeless. Highly recommended. 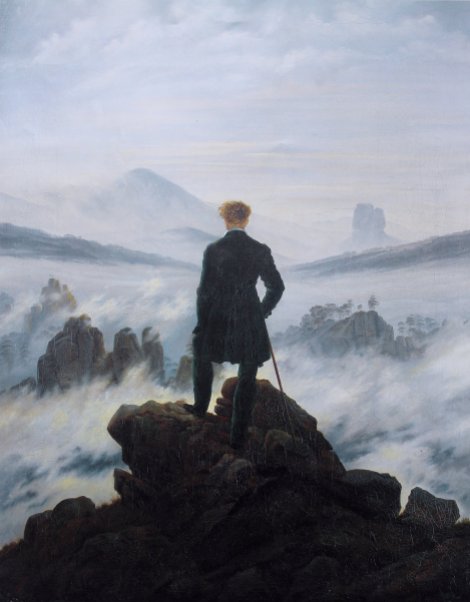 Caspar David Friedrich “Wanderer Above the Sea of Fog”