Browse: Home   /   That Out of Hell Leads Up: Wrekmeister Harmonies’ JR Robinson On “Night of Your Ascension” (Interview)

That Out of Hell Leads Up: Wrekmeister Harmonies’ JR Robinson On “Night of Your Ascension” (Interview)

Similar to the film from which the project borrows its name in slightly-altered form, there is more going on in a Wrekmeister Harmonies song than one can absorb in one sitting; where director Bela Tarr’s film Werckmeister Harmonies was an eloquent existential essay reflecting on the duality of human nature, J.R. Robinson’s Wrekmeister Harmonies directs our attention to linger on the shadows and, at least temporarily, to reside in the darkness they contain.

Released just last monthon Thrill Jockey Records, the latest Wrekmeister Harmonies recording Night of Your Ascension is a two-song exploration of dark emotions and inspired by violent events perpetrated by real-life monsters: Don Carlo Gesualdo (an Italian composer and nobleman who discovered his wife in bed with another man and murdered them in a jealous rage), and Father John Geoghan (a Roman Catholic priest in Boston whose pedophilia was covered up by the Church, but which nevertheless led to his death in prison at the hands of another inmate); both of whom were tormented by guilt over their transgressions and powerless to change the consequences of their actions.

Enlisting the contributions of a veritable small army of respected fellow musicians*, Robinson produced two lengthy tracks: the eponymous “Night of Your Ascension” (32:00) and “Run, Priest, Run” (16:47). The former, taken as the album’s centerpiece, is a dramatic progression with a distinctly visual sensibility evocative of depth, distance and movement, all relative to thematic anchor points which explore our fascination with the darker elements of humanity (and which are, sadly, all the more poignant in light of recent events in the U.S. and France.) Using a rearranged interpretation of Gesualdo’s madrigal “Ahi Dispietata e Cruda” as its base, the track slowly shifts from light and beauty to wicked, enveloping darkness. The latter track picks up the claustrophobic miasma and shapes it into an oppressive geometry from which the only escape is psychological catastrophe.

Ahead of his performance at The Cobalt tonight in Vancouver, we spoke with JR Robinson briefly about his work:

FWM: Reviewers have made a point of noting the duration of the two compositions on Night of Your Ascension and, in a previous interview you stated, “I don’t like to waste anyone’s time creating a piece on the fly;” so on the one hand we have a pronounced awareness or perception of time and then on the other we have a conscientious appreciation of its value. Looking at the inspiration for this project (Werckmeister Harmonies), it’s particularly notable for its manipulation of time; so the one thing that I wanted to start with is, how did time become such an important component of your own work?

JR: I think the ideas behind what I’m trying to communicate, it takes a little bit of time. I don’t find that I can do that in short, five- or six-minute traditional song structures. Not saying that there’s anything wrong with that, it’s just my way of creating. I’m more comfortable working with a longer duration. And it makes sense, I like to establish moods, emotions that have – I want them to be very precise and I want to be very sure of them.

Some of my favourite music is – I’m fairly old, so early hardcore music, some of those bands like The Freeze, they could communicate so much energy and anger, all these emotions, they communicated very well over a very short period of time and I could really really appreciate that. And then there are other artists, like Phill Niblock, who really expand your idea of time, you kind of lose yourself in it; so I wanted to be able communicate a few different emotions and it just seems to fit better over longer periods of time. I also want to be concise and I want to have a natural progression to these emotions and ideas as they go along, so I’m always very aware and cognizant of making sure the things I’m moving along and transitioning, subtly but perceptively.

Tying back to the film again, in the opening scene of Werckmeister Harmonies the director establishes a link between darkness and silence as being equally infinite and terrible concepts for humanity to contemplate. The paths that Wrekmeister Harmonies takes to elicit its emotive vision, they seem to be charted through those fields of emptiness without getting lost in them; does that take a toll on you as a composer?

Night of Your Ascension, that record – it was very difficult – it was very hard, for me. There were a lot of people involved, a lot of parts to it that needed to be put together. It almost seemed like Apocalypse Now, or Terry Gilliam trying to do Don Quixote – you’ve got all of these incredibly talented people all agreeing to do something and they’re all contributing, they’re all a part of it, and that’s a tremendous responsibility – to communicate to these people what you want, and try to shape that all together – it was very challenging.

I’ve never worked with a choir before, and this madrigal was originally written as a piece for five vocalists…It was, to me, this grand project, I was like, “Why not use 15 voices instead of five?” Why not spend a month reworking the score of this madrigal, or for that matter, go for both – rework a string section AND a choir. It definitely took a toll on me, and then for “Run, Priest, Run” it took a toll on me because I grew up in that part of the country, in Boston, and the Roman Catholic archdiocese in Boston was kind of a big deal when I was growing up, and I remember reading about Father John Geoghan when the story was first unfolding and just being tremendously hurt by it, and also questioning at the time what my relationship to spirituality was. Finally I just discovered that there is no god, this whole system is a hypocrisy – these instances of what John Geoghan did and what the Roman Catholic church did to hide his horrendous acts, it was a mockery. It was very painful for me to deal with, and then to try and put this all into a musical composition was something I would have to think about and it’s not a pleasant subject to think about. But I think it’s an important subject for people to think about. 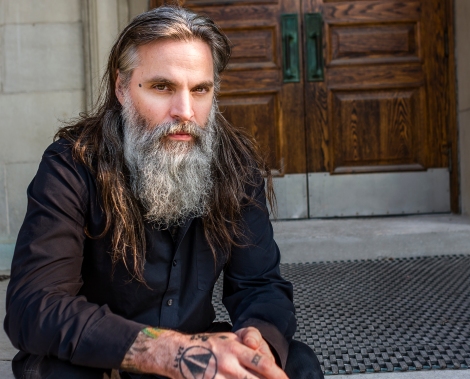 The historical figures that you’re working with here that provide the inspiration for your compositions – they’re fascinating for their representation of very different human manifestations of darkness. But their stories and the way that they’re expressed through your music – they seem very human, despite the various monstrous acts they committed. Again, coming back to Werckmeister Harmonies the film, it’s like an eclipse where the darkness moves across them rather than simply being something manifested within them.

There are a lot of scenes in that film, Werckmeister Harmonies, that really affected me. One of them is the scene where Janus is out at night, and he notices a large truck off in the distance and coming down the narrow lane that he is in. He has to press himself up against the wall and you see the shadow of this large truck looming, and spreading across this wall, slowly, like a stain, and it washes over Janus and blots him out. In my mind it obliterates him at that moment, and that to me, is one of many moments in the film where I was trying to reconcile this whole human condition of lightness and darkness – where is god in all of this? And why do we put so much faith in something that is clearly a man-made perception? – and then there’s other scenes in the film, like when he’s in the back of the truck, looking into this monstrous whale eye, questioning his existence and the existence of god – and he’s in the back of a truck! It’s so absurd! He’s in the back of a truck in a village square, with this rotting carcass of a whale in Hungary, I think. It just blew my mind.

It is, but I also feel like it forces the viewer to ask a lot of questions about what they accept as their own spirituality and their own relationship with god. Because saying you don’t believe in god, that’s not a very popular opinion, if you just went out and told family of friends that you don’t believe in god or that you’re not even atheist, that might not be a very popular conversation to have.