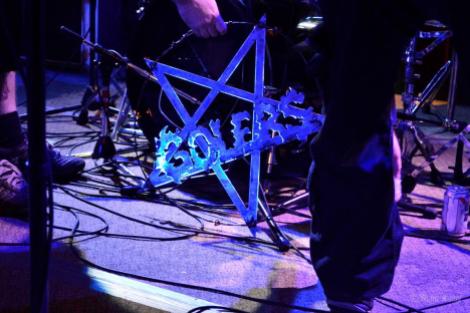 No one loves Halloween more than fans of dark art, whatever the particular format or genre, and while the costumed crowd at SBC Restaurant may have known to expect a memorable show from Dead Girls Productions (complete with gorelesque dance numbers courtesy of Misty Graves and her dancing ghouls), but this night the devil himself was on hand to light the fires early.

The Golers’ all-out thrash attack landed a solid fist between the lips of the SBC half-pipe to close the show, but the knockout punch came in the second round: following Soulsucker’s opening set of punked-out garage rock and prior Christ Air’s crossover ministering (featuring some of the best drumming one has seen in this city; bless you, Stephen Gunn), Chilliwack’s unholy sons Medevil battered the crowd with a relentless assault of wicked flaming metal, like a rocket-propelled bat out of hell (for those who missed it, seasons will pass before the marauders are seen again as the quintet have pawned their souls to focus on recording their debut album over the winter months.)

← Photo Gallery: Descending the Steps with Bölzer (wsg Ritual Necromancy + Spell + Harrow) at The Astoria, Vancouver (18 October 2015)
Painting the Corpse: Don’t Let Your Halloween Makeup Fail Get You Down (An Interview with Makeup Artist Eavan Derbyshire) →